Fashion • Jan 12
Alistair Waterfield participated in Elite Model Look in the United Kingdom last summer after being scouted at a festival. His first catwalk show outside the competition was this weekend when he booked an exclusive for the Burberry menswear show for Autumn Winter 2016, and had the honour of opening and closing the show. Alongside Serge Rigvava, Ruth and May Bell, Simon Jørgensen and Ysaunny Brito, he was one of six former Elite Model Look contestants who walked in the show. We caught up with him to find out what it was like to walk for London’s most prestigious label, and what he’s most looking forward to doing next.

How was the show?

It was amazing! I really enjoyed it, everything from the very early stages when I first met the design team, doing the looks and going on to work with different teams like the social media. Finding out that I was opening and closing the show was a huge surprise, and it was amazing spending the time with Christopher Bailey and everyone else. It was a fantastic experience. I first met Elliott Smedley, he’s a stylist and is in charge of a lot at the shows. He requested to see me quite a while ago, probably in November or even October, but he just wanted to see me. It was exciting in itself because from the beginning, when I got scouted, I got told I look like a Burberry model, so that put this grand idea in my head. I never really considered modelling in the first place, but then that dream became a reality. 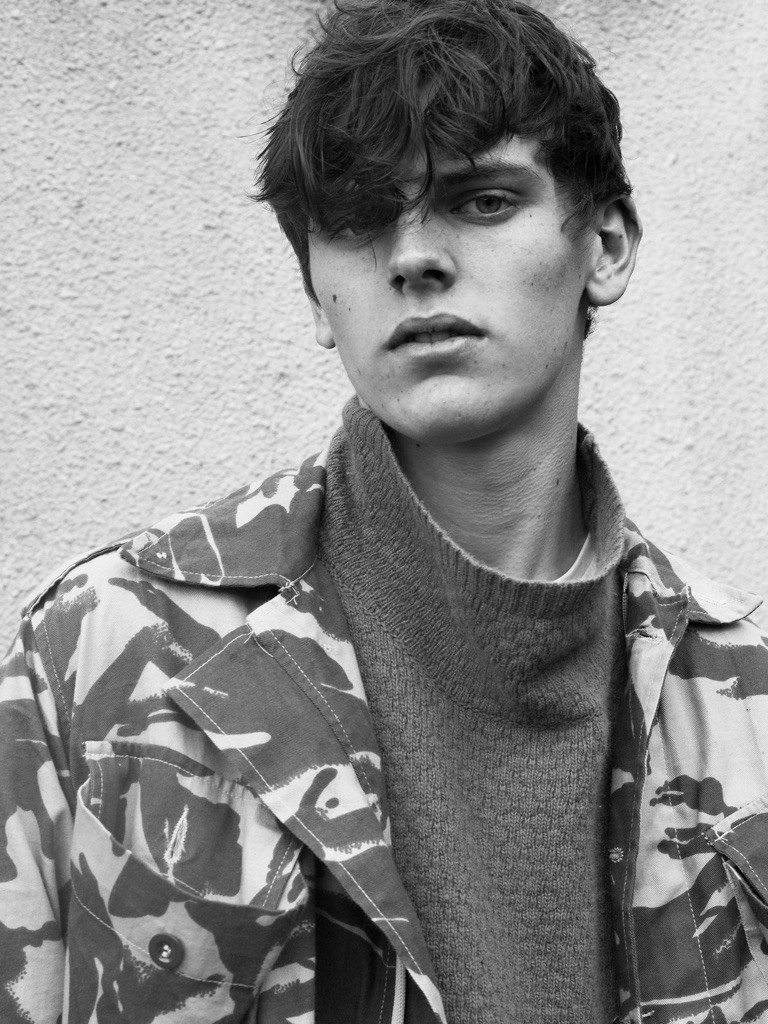 What was the next stage?

The next stage was being told that Burberry were really interested and that they wanted me to be involved in the collection in some way, but they were being vague. I don’t know if they had plans for me to do the show at that stage. It was just for some of the prototypes that they had and they needed a fit model. Matthew Bell was there too, who’s another Elite Model Look model. It was just us two, that was a good experience. He’s hilarious, really energetic.  Then Elliott told me he wanted me to meet Christopher, so this was a bit further down the line, and Elliott was interested in bringing me a bit further into the show and making me an exclusive. He said he wanted me to meet Christopher and get the thumbs up from him. 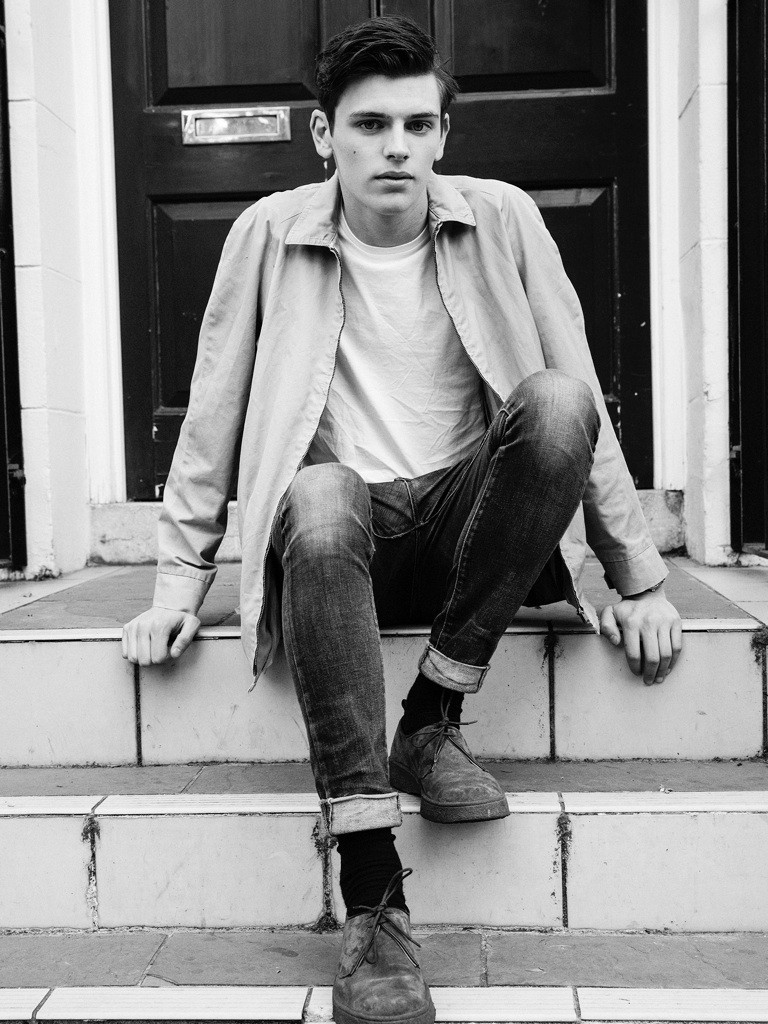 What was it like when you met Christopher Bailey for the first time?

Meeting the CEO of Burberry was something in itself anyway, and to work with him so closely as I have has been an amazing experience. I was in the basement at the Burberry HQ, and I was just trying on a jacket and some trousers, and they said, “Christopher’s just going to come down”. I met him, he got me to do a little walk up and down, and he just said “nice to meet you", and I shook his hand, and then within a week, I was told he’d given me the thumbs up and he really liked me. He’s lovely, he was talking to me up until the last second before I went on at the show today, which was really nice! 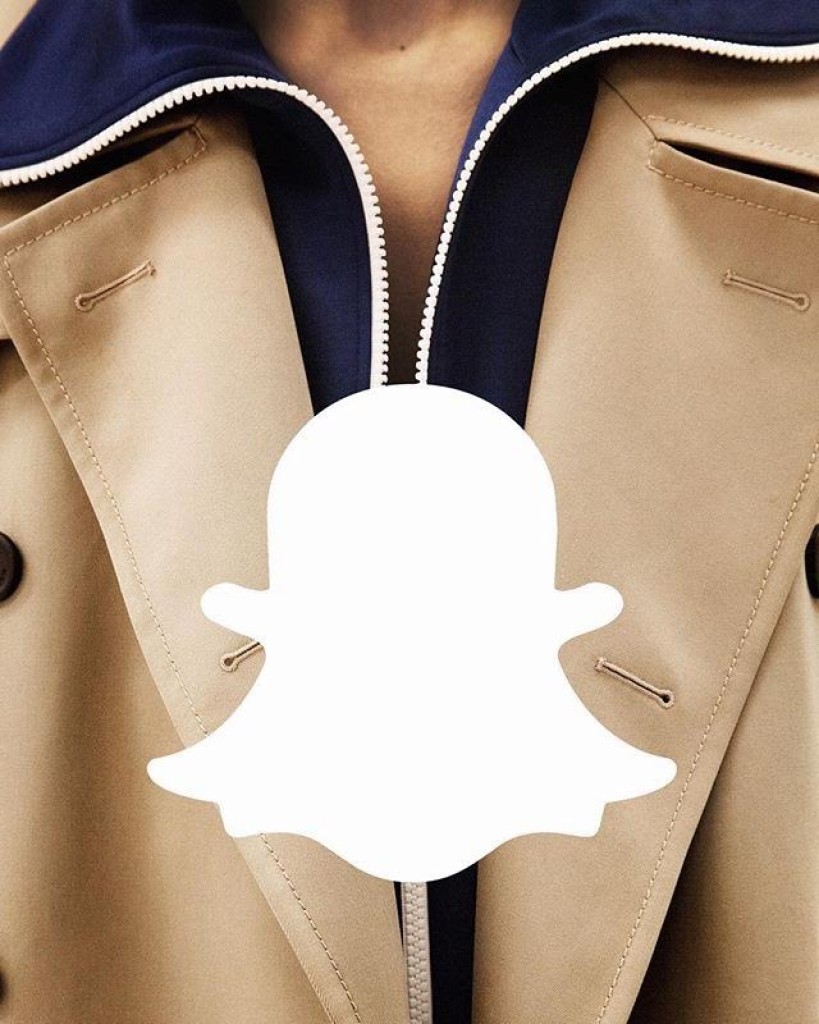 What did they get you to do for social media?

I met up with them during the daytime between 10 and 3 in Piccadilly Circus. They were putting together a teaser for Snapchat. I had to walk backwards through a crossing, then they reversed it so that I was walking forwards and everyone else was walking backwards. It was surprisingly easy to do actually, I was worried because they were telling me how unnatural people look when they do that, but I managed to get it fairly quickly. It started with me arriving in Soho and getting out of a taxi, and then walking down the street into Piccadilly Circus; or rather, I had to walk backwards across the street and then hop into a taxi! Then walking backwards down a cobbled street, which had its own challenges. A lot of people stopped and stared, so they had to do the takes again because they didn’t want too much of that in the background! 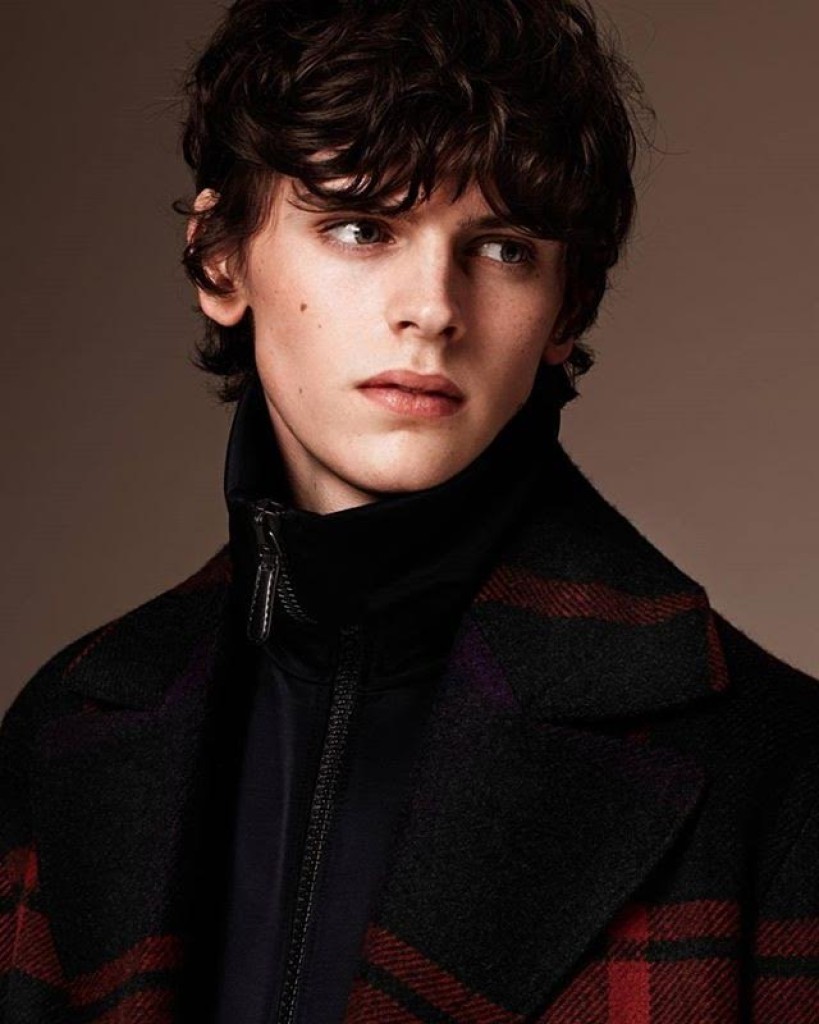 What was it like when you got there before the show?

I had a call time at 8 o’clock, so I had a car at 7. The first thing that they did was to sit me down and they did my hair, and they did my make-up. Then I went with Simon [Jørgensen, EML 2015] and some of the girls to the show stage to do the test under the lighting, so that was quite a daunting experience seeing the set all ready and seeing where all the people would be. We did a walk through, so we actually had a bit of an advantage over everyone else who was walking later on! Simon had the glitter under his eyes - I was a bit jealous of that! [laughs] Later, we all did a quick walk through with our shoes that we would be wearing in the show. I was wearing trainers, I was quite glad to start with something comfortable and easy to walk in. I had enough things to think about during the actual show! 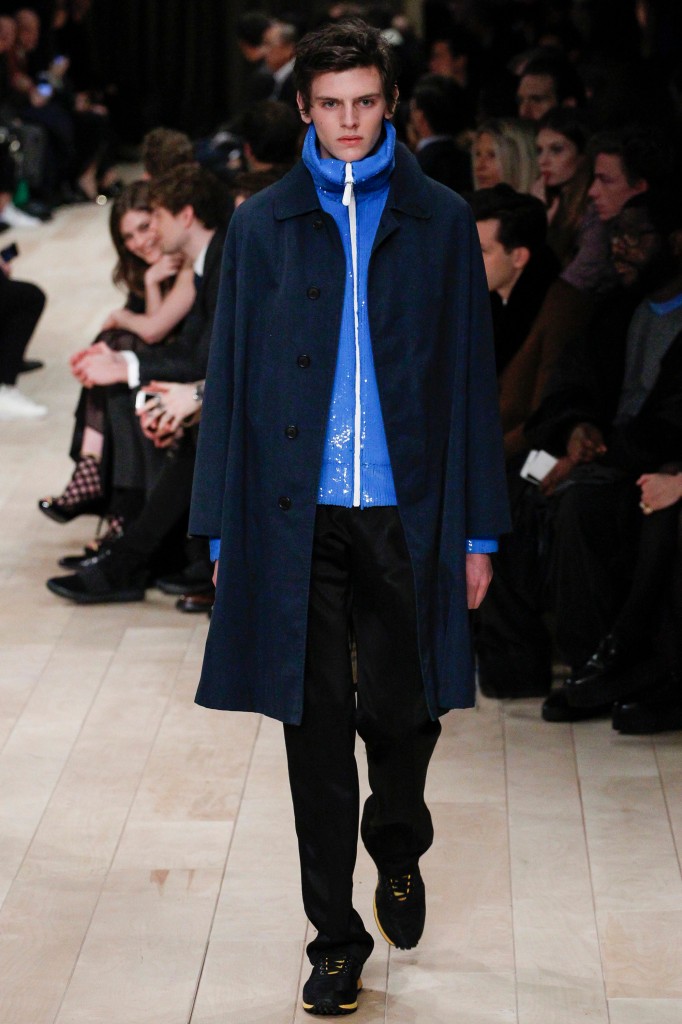 What was it like backstage before you went on?

We were all lined up ready to go, and Christopher was on my left. He was talking to me and to Simon, because Simon went on second. It’s funny how you see all these CEOs and he seems so down to earth. He was joking around with us, he was really friendly. It was so much easier - I think if he’d put pressure on me, I wouldn’t have done half as well. I was one of four models who had a second look, and we were all exclusive. I did the first and last looks. It was amazing! Just to hear the applause, and to go through the final curtain. But of the two walks, opening and closing, I actually preferred opening, only because it was such an alien concept and it was, “this is is, there’s no backing out now, I have to go for it!” Before I’d gone out and seen the people, seen the cameras, or the lighting, I was just ready to go. Closing was good too, but opening was amazing. 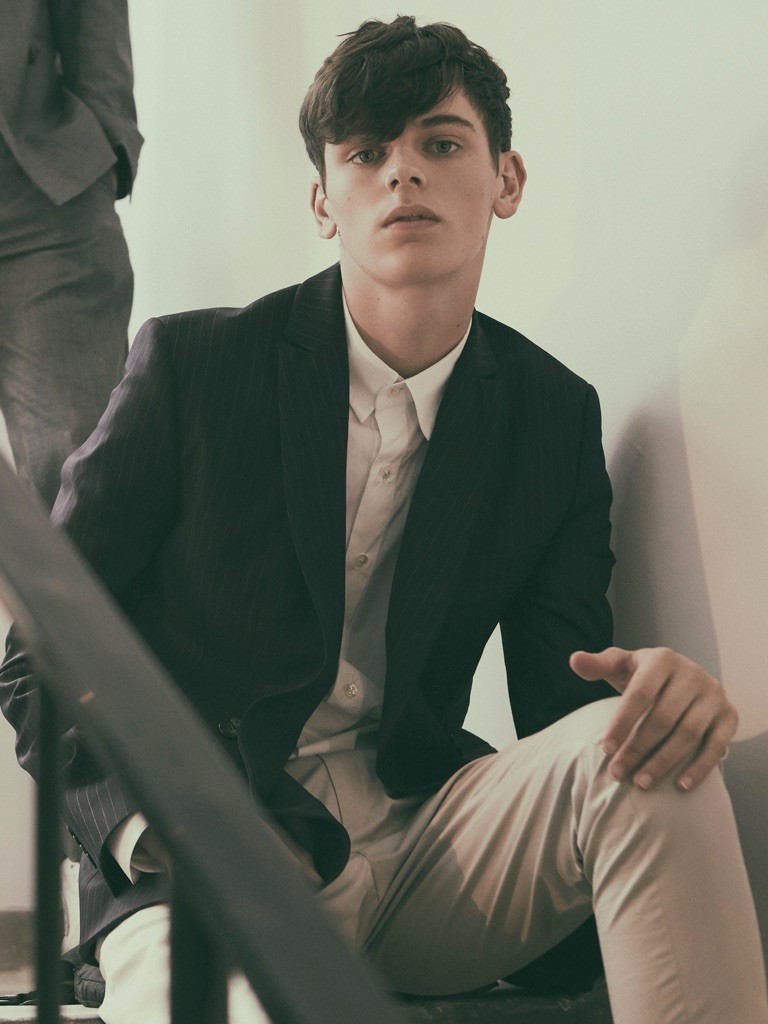 How was it to do Elite Model Look?

It was fantastic, it gave me a really strong foundation to build on. It gave me all of these contacts, all for this new information, all of these people that I was comfortable around; everything about it. I only had a few hours catwalk training, but it was so important. I learned references which I still think about now. Like keeping my chin up - I have a tendency to look down, it’s part of being taller and having shorter friends. Posture was something I found hard, but I’ve been practicing. I know if I’m uncomfortable I’m doing something right! [laughs] I’m not sure what I’m going to do next, but I’ve been told that I’ve done well for myself so far and that it’s going in the right direction. Signing for Elite Paris as well is good, because it opens me up to international work. 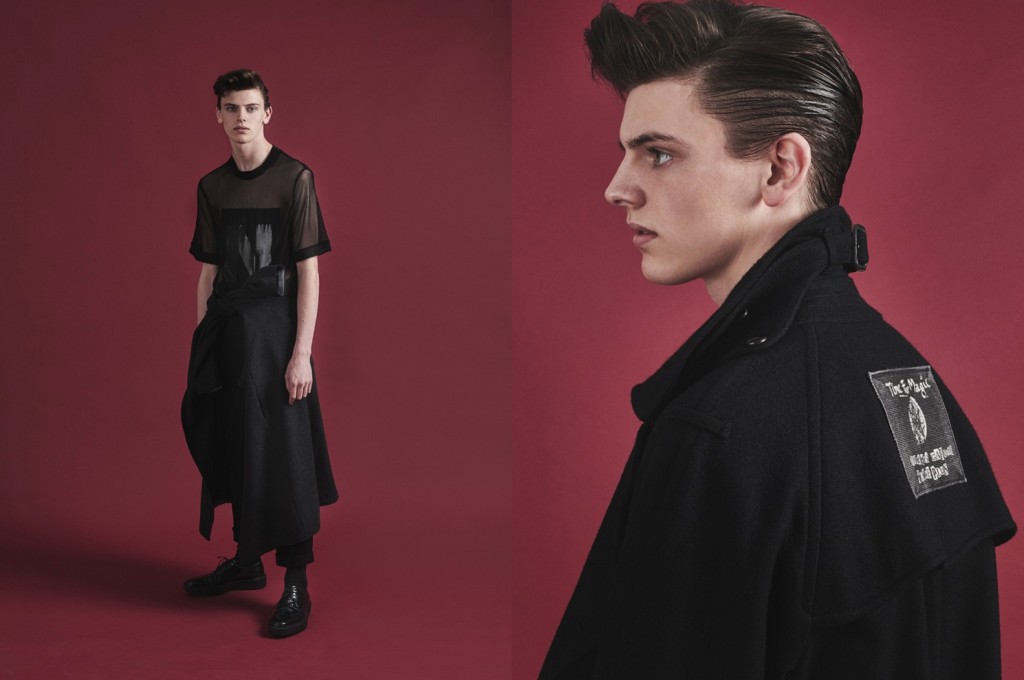 Had you considered modelling before Elite Model Look?

No, it was a really alien concept. My mum was a model for a while, in Bristol, so she was always very supportive. Being my mum, she’s always said, “oh, you’re so handsome!” But you never pay attention to that! [laughs] It wasn’t something I considered, but when I was first scouted, I was actually scouted twice during that day at Latitude Festival, and at first I thought it was weird, but when the second person approached me, I thought, “there must be something in this”. I’m glad I did because it was so close to EML before I could enter, so if I’d left it any longer, even by a few days, I wouldn’t have been able to compete.

Do you keep in touch with the other competitors from EML?

Yeah, all the time, we have a Facebook group. We met up after, we had lunch and we had a nice outing in London with one of the photographers, it was great. At first, in the competition, the boys and girls didn’t mix that much, but as it got later in the competition, and at the after party, everyone was just a lot closer. It’s really nice to have friends like that who we’re all in the same position. No one thought, “that’s it, I’m going to be a model”, they just thought, “this is a fun, interesting opportunity” - and it is something I want to do. But you hear things about it, as an outsider, maybe that it’s pretentious, when you see these catwalks, but everyone was so different, the competition was a real eye opener. It was people just like me. I was a bit disappointed not to go to Milan [for the EML World Final 2015], but nothing to put me off. And I was so pleased for Charlotte [Corn, EML 2015] to get into the Top 15, it was a huge achievement! We were all messaging her to say well done.

Who were the breakout stars of Fashion Week FW16? | Video 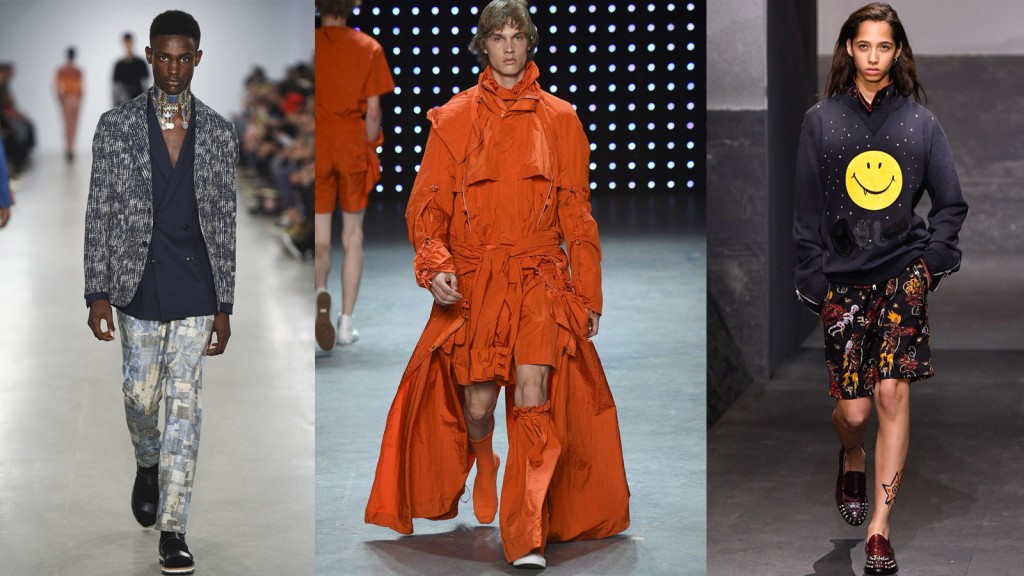 What Went Down at London Men's Fashion Week Spring Summer 2017 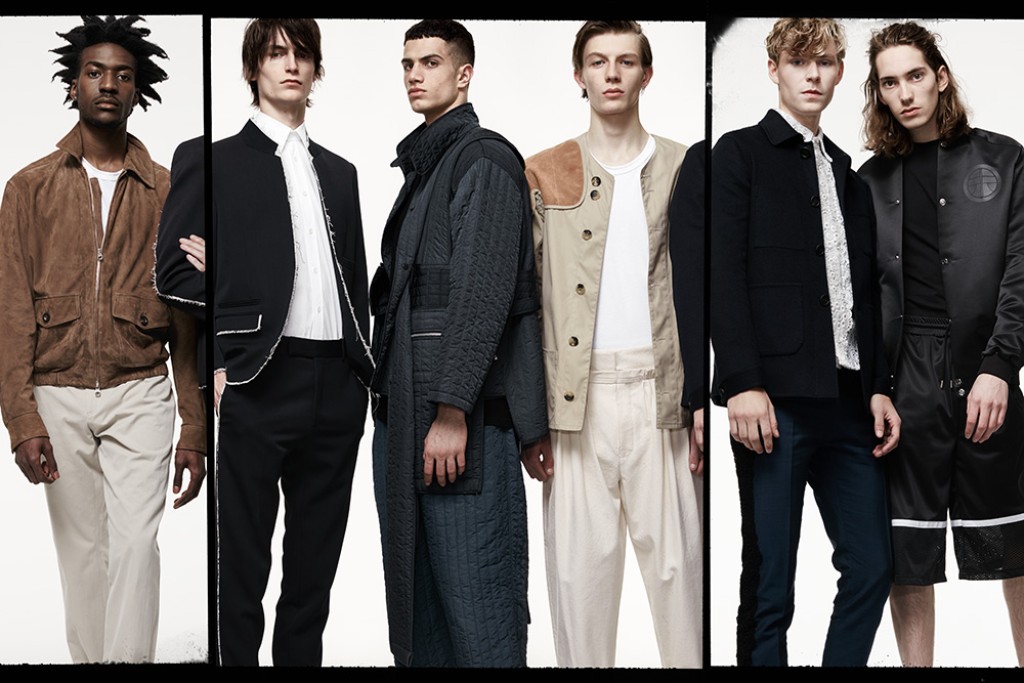